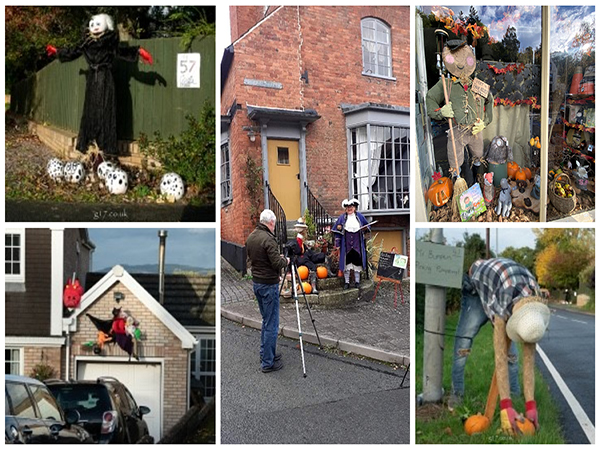 Today, four amazing entries for our Scarecrow Competition and Trail were announced to mark the close of this much-enjoyed week-long event. Montgomery’s infamous Town Crier, Sue Blower (whose scarecrow doppelganger was Monty Belle), revealed the winners as....

Best dressed category went to ‘Cruella’ by Hannah Case and family who won a Checkers at Home voucher and Usborne books. She only just popped Sherry Bobbins at the post, who posed a dramatic figure hanging from the arch on the Old Gaol.

‘Mr Bumpkin picking Pumpkins’ won the funniest award in the competition: a very cheeky entry by Kirsty and Neil in Verlon Close. They won a Regents Cinema voucher for 4.

‘Percy the Park Keeper’ by Bunners stole people’s hearts and won the best business award. They can have a well earned drink to celebrate with a £20 voucher from the Dragon Hotel.

The overall favourite voted by the people was the fantastic ‘Room on the Broom’ which beat the ‘Monty Minions’ by one vote!! The winning entry by Steph Evans and family was awarded a bottle of Bramble gin and some Usborne books.

The free prize draw for finding all of the entries included a keg of Montys beer a selection of alcohol donated by Tesco and an Osborne book and toy. The Friends would like to say massive thanks to all those who donated prizes.

We would like to say a huge thanks to Kate Macdonald for the amazing job she has done in coordinating everything and undertaking lots of work to make sure every ran smoothly. Thank you too to those individuals who helped Kate (Hannah Case, Clare Jones, Hayley Williams, Georgia Dickinson, Georgi Taylor, Alwena Richards), alongside Bunners and SPAR Stores Montgomery for selling the trail maps and Pip Rose Hunter and Amber Meredith-Jones for the map and poster design.

And last, but certainly not least, thank you to all of you who have participated with all of your wonderful, creative and just brilliant entries and to all of you who completed the over-4 mile stint around town to see them all! Between you all you raised just over £1000 towards realising the new play park!